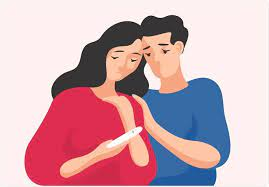 Infertility means not getting pregnant despite having carefully timed, unprotected sex for one year. An estimated 10%-18% of couples have trouble conceiving or having a successful pregnancy/delivery and 1 in 8 couples have problems conceiving.
There are many causes to infertility in both men and women.
In women, it can be caused by:

• Trouble with ovulation such as ovulation disorders like PCOS, premature ovarian failure, or too much prolactin.
• Damage to the fallopian tubes (which will prevent sperm from reaching the egg or it could prevent the fertilized egg from getting to the uterus). Some was the fallopian tubes can become damaged are:

1.) Pelvic inflammatory disease (PID) which can be the result of untreated STDs.
2.) Previous surgery in the abdomen or pelvis (Including surgery for ectopic pregnancies)
3.) Pelvic tuberculosis

• Endometriosis ( disorder in which tissue similar to the tissue that normally lines the inside of the uterus grows outside your uterus.)
• Uterine or cervical causes such as:

1.) Benign polyps or tumors
2.) Scarring or inflammation within the uterus
3.) Cervical stenosis (Narrowing of the cervix)
4.) Sometimes the cervix can not produce the most suitable type of mucus to allow the sperm to travel into the uterus.

• Long-term use of high-dosage nonsteroidal anti-inflammatory drugs such as aspirin and ibuprofen.
• Antipsychotic medication

In men, infertility can be caused by:
• Anabolic steroids (Used for improved athletic performance or hormonal issues like delayed puberty.)
• Sulfasalazine (Used for rheumatoid arthritis or ulcerative colitis)
• Low sperm count
• Having antibodies that attack your sperm and destroy them
• Shape of the sperm
• Varicocele, or swelling of the veins around the testicles

Some shared causes between men and women are:
• Recreational drugs such as marijuana and cocaine
• Chemotherapy or radiation therapy
• Genetic defects
• Untreated infections such as chlamydia, mumps, HIV, and gonorrhea.

The good news is though, that there are still ways to conceive such as through medications to mimic the effect of estrogen on various tissues, anti-diabetic medication to control the amounts of sugar in the blood, or even sex hormone suppression to help stop or slow the hormones involved in sexual health.

There is also the option of artificial insemination which is the insertion of sperm directly into a woman’s womb, ovulation induction which uses medication to make the ovaries release eggs, or IVF (Invitro fertilization) which mixes the women’s egg with a man’s sperm in a lab.
So, while infertility can be rather harrowing, there are still many, many options out there to seek out help with conception! It may take time, but many couples who experience infertility do eventually conceive.

Many people realize that our conventional industry of dis-ease may not always have the people's desire for improved health as its main objective or intent.